Dennis Conrad  started it all nearly a half century ago when he was working toward a merit  badge in scouting. Later in life he inherited a flock of chickens that had  belonged to a friend that had been raising them for their hackle. The blood line  of that flock had been developed for over 40 years and Denny continued that line  for the next several years. Operating under the name of Conranch Hackle, Denny  and his daughter Liz sold premium hackle to the fly fishing community. Careful  breeding and selection is what  made Conranch Hackle special, and their hackles were always in high demand by  those fly tyers that demanded only the best. 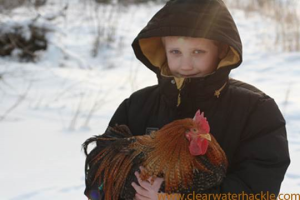 In 2012 Denny  and Liz decided that it was time to spend more time fishing and less time  feeding chickens and selling hackle. They found a buy in the Lars Benson family.  Operating under the name of Clearwater Hackle they intend to  continue the tradition of offering the finest hackles available for the fly  tying community.

Clearwater  Hackle is a family-run  business located in the heart of the Rocky Mountains. We specialize in feathers  for the fly tying community, with a special emphasis on dry fly hackle. Our  flock comes from the famous Conranch Hackle line and is believed  to be the oldest pure strain of Darbee-selected chickens in the world. Developed  over several decades by Denny Conrad we are able to continue to produce hackles  of unsurpassed quality.

We have a full  range of natural colors and our hallmark is our five-colored Cree, which is  unique to Clearwater Hackle.

Quality  products, great service and affordable prices are our goals. Satisfaction is  guaranteed.

Contact us today  a www.clearwaterhackle.com for our current selection of  quality hackle.